Electrical outlets in the US and the UK look very different. Those in the UK are much bigger. They seem HUGE to me. They always have 3 prongs and the prongs are much larger. 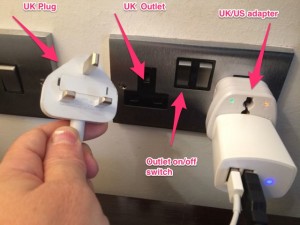 Actually there is another kind of plug in the UK that has two prongs and is always marked “Shaver Only” and always in the bathroom. I’ve never used one of these so I don’t have much to say about them.

Talking to another visitor from the states about the outlets, he said, “…and it’s all 220”. In the US we do have larger 3 prong plugs that carry 240V. They are primarily used for large appliances like clothes washers and dryers. I also called them 220. I don’t know why since they are 240, unless it is that appliances that use them are called 220. The usage voltage is always lower than the outlet voltage.

But I wasn’t sure the current was actually the same. Did a little research today to answer this question and thought I’d share.

There are two main differences between household power in the US and the UK, voltage and cycle rate.

If you are curious, US voltage is shared by Japan and Taiwan. UK voltage by Australia and New Zealand. The rest of the world is 230 +/- 6%, which is the new EU standard and something the UK is working to use.

So that’s another difference, they also have a different “hertz rate”. They alternate a different number of times per second.

From a traveler’s point of view, this just means you need an adapter to plug in your stuff. I’m sure most people think this is just because the plug shape is different, but there are some electrical stuff going on in there to change voltage and cycle rate. Interestingly this is actually one of the advantages of AC. It is easy to change the voltage at the point you want to use it.

I should also point out that a lot of stuff that lets you plug in your DC/battery powered devices, like a laptop or cell phone, really just needs a new plug. The conversion from AC to DC that happens already has to bring down the Voltage, way down. For instance my MacBook Pro’s power adapter bring it down to 20V.

This also means I can buy a UK MacBook adapter and use it with my MacBook without fear. Technically if I could just find the part with the plug on it, that’s all I’d need to make the switch. But alas, Apple doesn’t sell just that bit of cable or plug by itself, though they give you both when you buy an adapter. 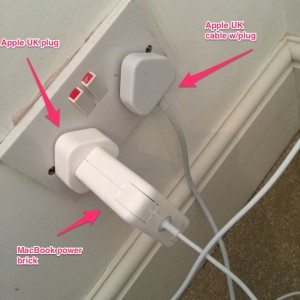 Which is what I bought when we got to the UK. I needed a new power brick/cable anyway because my old one was frayed. I went to the Apple Store in London when we first got here and just bought a UK power adapter. It came with a cable and just the little plug part. I put the plug part on the Mrs’ US power adapter brick and used the cable on mine for the rest of the trip.