There are a number of little things that are different in the UK. Here’s a few.

Switches are Upside Down Of course the Brits would say ours are upside down. 🙂 A light switch in the down position is On not off.

Every power outlet has a switch on it. I won’t even mention the plus are different and HUGE in the UK, but all the places you plug them in have a switch next to them that turns power to that one outlet on and off. This extends to things like your oven and countertop appliances.

They have different switches Like the US, there are lots of different power switches, but the one I see the most often is a rocker switch. It also makes the down is On more logical because they often have a little red flag on the top that’s only visible when the switch is down. So you can look down at a switch and tell if it On.

We have pull string switches in the States, but here they are very common in Bathrooms. They also make a lot of sense when you have a very small space and wouldn’t have a clear wall to put a switch on. I’m thinking about getting one for our bathroom at home, where the light switch is on the outside wall.

Melatonin requires a perscription As a guy who has trouble sleeping through the night, the supplement Melatonin is a requirement every evening. Imagine my surprise when I went to a natural food/vitamin shop and couldn’t find it. I asked and they said they didn’t carry it. A quick Google search told me there is no OTC Melatonin in the UK.

There’s a Tax on Dining InWhen you go to place like Starbucks or McDonalds, they will ask you if you want it “Dine In or Takeaway”. This isn’t just because they package it differently. They actually have to charge you more for Takeaway. I think it is a pound per order, but it may be per item. Starbucks actually lists two prices on the board. 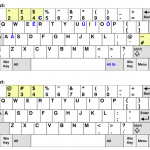 They have Different Computer KeyboardsI was registering my Oyster card when I joined the London HackerSpace and they wanted me to type in my email address. In the middle of the address I couldn’t find the @ sign. Shift-2 is the “, and the @ sign is where the ” is on our keyboard, over the single quote. Shift-3 is £, which maybe why I call the # the “pound key”. See the image for complete differences.

Stores with no UK Equivalent

Wal-Mart/Target There are some fairly large grocery stores, and a Tesco Super Store is a little like a Wal-Mart Super Store, but only a little. They have department stores where you can buy clothes and housewares, but they don’t have that category where you can buy toys, clothes, sporting goods, etc.

Hobby Lobby/Michael’s I needed a sewing kit and some proper needles. Well I can find cheap set at a Pound Store (Like our dollar stores and just as prolific), but there isn’t a big crafts store.

This has been the most difficult thing for us. We’re Americans and we’re used to tipping for everything. But in a conversation with an English photographer friend his comment was “Never. They picked their job, if they don’t like what they are paid get another job.”

On the other hand we Americans have corrupted the culture, and more places are encouraging tipping. At restaurants they either include a 10% “service charge” or say on the bill, “Service is NOT included”.

In the book Watching the English by an English anthropologist she told us it was an insult to tip a bartender at a Pub. That means they are “the help”. Instead you should occasionally buy them a pint.

They have a lot of delivery and none of those people expect to be tipped. I tipped a food delivery guy out of habit in Scotland and he appeared surprised.

In a twist, Uber, the disruptive car hire service started in the US, only allows tips for Taxi’s in London. Apparently London cabbies expect tips. (Uber by the way is cool. Used it for the first time getting from the train to our flat with 6 bags on arrival in London.)

Obviously the words used are different too, but you can find those in Britishisms.