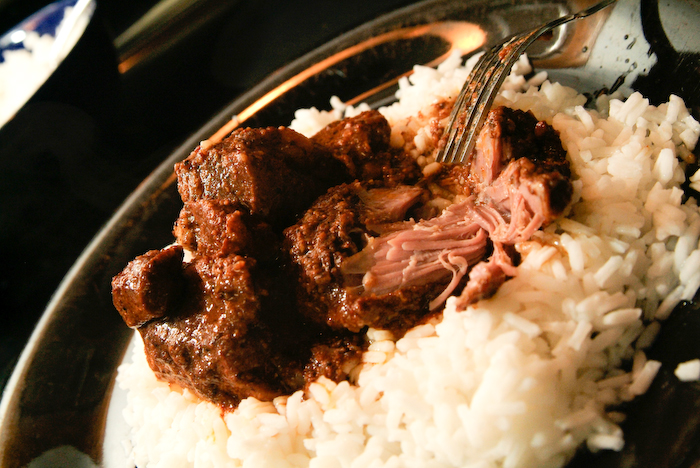 So I cooked Puerco Pibil again this weekend, because, though it was way too hot last weekend, it tasted really good.

This weekend it wasn’t as hot, but it also wasn’t as good. It had a strange aftertaste that was almost metallic. I did have the Annto seeds this time. I ordered the off eBay, so that part of the recipe was right. But there were a number of things I didn’t have.

I decided to cook it on Sunday morning since I had a shoot most of the day Saturday. But I didn’t go grocery shopping till 9:30 Saturday night. I went to my local supermarket and got most of what I was missing. The one thing on my list I didn’t have was tequila. Well they don’t sell hard liquor at grocery stores in Texas. So I went to the liquor store. But it was closed. All the liquor stores were closed. At 9 o’clock on a Saturday night.

Then I got home and start laying out and mise en place. Well I hadn’t gotten lemons either. I happen to have 2 limes and 1 lemon in the house. A quick search online revealed you can substitute lemon juice, though it is not as good as fresh lemons. So I used the limes and lemon juice.

So limes instead of lemons.

On a side note, was there some kind of citrus plague or famine or something. The only limes and lemons my super market had was just a little bigger than golf balls.

I set everything out Saturday night. I cut up the pork butt into chunks and put them in the bag, which went into the fridge overnight. Even put all the spices to be ground into the grinder.

In the morning, with an extra hour of sleep because of the time change, I peeled the garlic, juiced the limes and lemons, and ground the spices. Then I blended everything together and poured it over the meat in the bag. Took me about 20 minutes to get it in the oven.

Now I’ve skipped the banana leaves every time I’ve made Pibil. Just put it in the Pyrex baking dish. It looked like this before it went in the oven. 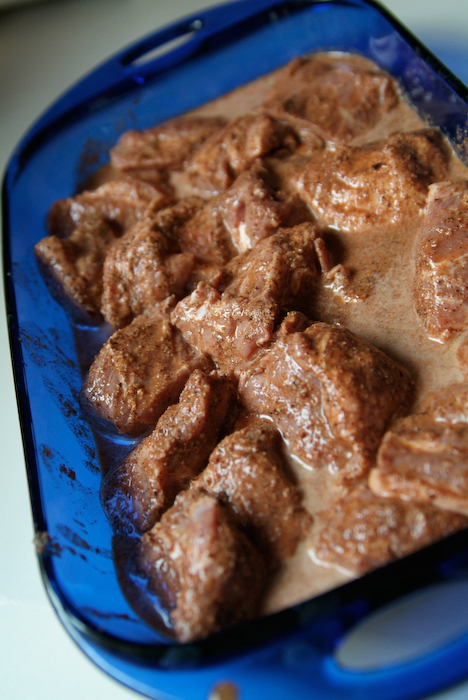 I decided I need to start taking pictures of my cooking. You know, to put two of my passions together. So I was experimenting with various ways of aiming my off camera flash to get that effect. There wasn’t enough daylight to get a natural light photo.

I say this because it made me make mistake #3. I forgot to cover the pan with aluminum foil when I stuck it in the oven.

I realized it about a hour later and covered it, but it cooked for 1/4 of its cooking time exposed.

Went off to church with it cooking and got home in time to make some rice and serve. Here’s what it looked like fresh out of the oven. I like the black backgrounds best. 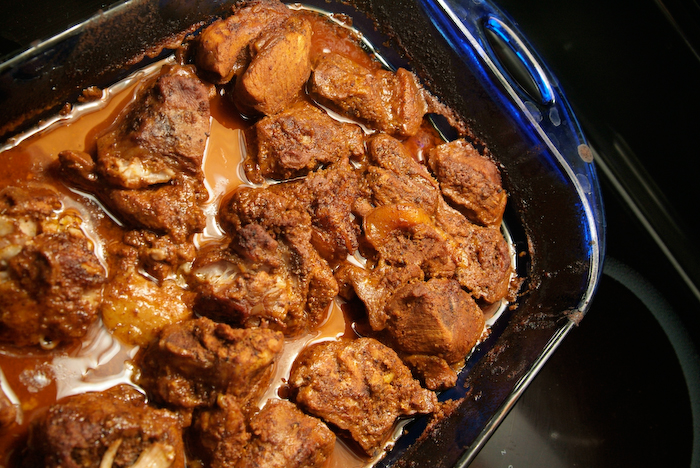 The first picture is what it looked like plated. It was pretty, wasn’t it.

To me the taste isn’t horrible, just not as good as it could be. If there are any cooking gurus who could venture a guess as to which mistake gave it a strange after taste, please leave a comment. My best guess is the limes. I’ll make it again next weekend, but following the recipe to the letter.