from him. The concept was compelling. A story where the main character doesn’t talk. And he is carrying a baby though a post-apocalyptic demonic wasteland. 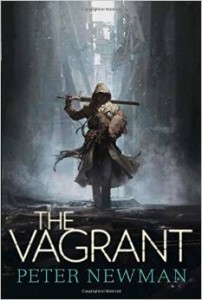 Don’t think he mentioned one character was a goat.

From the beginning you know you are dealing with an author who is pushing for quality. A non-talking main character is a pretty big burden to take on for a first time author. But it works. He pulls it off and you never feel like he cheats where the character kind of talks.

The author’s prose style is also unique. If I had to compare him to someone it would be Neil Stephenson, who’s style is also peppered with one of a kind metaphors. Peter also anthropomorphizes everything, from the goat to grass thrown into the wind. The world comes alive in a number of different ways as you travel through the wasteland.

It is a melliu story, the book begins with The Vagrant at the beginning of a journey, carrying a thing to a place, and ends when he gets to that place and delivers the thing. I’m trying really hard to not spoil anything.

My only complaint with the book is it is too long. Maybe that is because of the current requirement by publishers that novels must be over 100,000 words, or if the author felt that’s how long it needed to be. But I could have done without yet another city we must travel through and experience another dark side of humanity.

Also there is a bad guy introduced in the last quarter of the book that just seem to be there for a possible sequel. I did feel the book stood on its own though, so don’t let that deter you from reading it.

Meeting an author before you read their book is a strange thing. Peter and his wife Emma – author of the Split Worlds books – are the team behind the Tea and Jeopardy Podcast. They are also two of the nicest people you’ll ever meet. I was so impressed with their proactive diligence in starting meet-ups at UK cons just for first time attendees. Lot’s of people say, “Hey someone ought to do something for people who’ve never been to a con.” They actually did something.

Give that, Peter obviously has a dark side. Some of the ways the demons use their powers to convert people into…things… are decidedly twisted and gross.

I enjoyed the theme of the book that one good person, who does the right thing even when it is the hard thing, can make a difference. The Vagrant was a paladin, doing good, not just avoiding evil.

Overall I like the book and think you all should go out and buy it.

This review was of the audiobook. I would have bought the Kindle version, but it isn’t available in the US. Stupid publishers.