We’ve come to the end of our first location in the UK. Ten days in Brentwood, Essex staying with our expat friends Jonathan and Angela. Wasn’t what I expected, since I thought they lived in a suburb of London and that Jonathan worked in London. Brentwood is kind of a suburb of London, one train stop from the end of the line that’s considered part of the London Underground, but it is very different from the city. Plus our friends live in the middle of park, about 2 miles of woods away from the city of Brentwood.
Though things were unexpected that wasn’t bad. It was good to start a trip with Americans who could ease us into the UK. We didn’t have to deal with a native culture all the time while learning about the money, or how simple things like eating out or finding wifi work.

While we plan on only using public transportation during our trip, we spent a lot of these first days in a car. On the “wrong” side of the road, sitting where the driver belongs and flinching at every turn on the tiny little roads. We also did a lot of touristy things like stopping at every old church to take pictures and visiting museums and seaside towns.

All it all it was a fun time.

I keep saying that to myself whenever something goes wrong.

For example the time in Brentwood when we accidentally gotting on a train the wrong way, thinking we were heading toward London but going to the next town over. It turned out we were on a “train train” one that requires a ticket, not just an underground pass. They are very serious about taking a train without a ticket. There’s a £1000 penalty fare. Luckily for us there was a nice lady who told us to go back to the platform and catch the next train back the way we wanted to go.

Of course that train went all the way into London. We road standing up, then got off and found the train back out to Brentwood. While we road trains for almost an hour to our Oyster card (the London Underground pay card) it looked like we just moved one stop west. 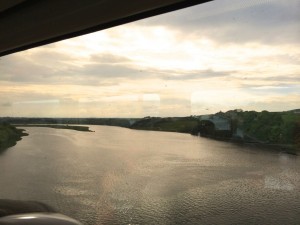 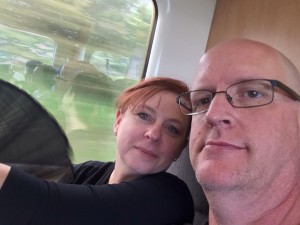 Our train from London to Edinburgh was another adventure. I’d bought tickets in advance and had them ready to go. The train boards and is “fully reserved”. That means every seat is reserved for someone. Our ticket – and those of at least 50 maybe 100 others – were not reserved.

But you can stand.

Feeling we were doomed to stand for 6 hours we jumped off that train and got on the next one to Edinburgh. There someone finally explained we could sit in a reserved seat as long as the person it was reserved for wasn’t getting on till we got off at Edinburgh.

Of course we managed to get on the coach (train car) that’s AC didn’t work so it was hot the whole way. There was also a huge clan in our coach with half a dozen little one who would not sit down.

I often joke about, or just feel like, I’m getting old. One of the traits of old age is not being about to cope with the unexpected and change. One of the points of this trip was to exercise that ability. Getting lots of exercise for sure. 🙂

As an aside most of this post was written on the trip to Edinburgh and not posted till now. It’s hard to keep up with posting, but I’m trying.