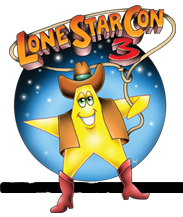 This August I went to my first WorldCon in San Antonio. It was a lot of fun and made me want to go to more cons. Already signed up for London in 2014.

There were a lot of great things about the convention and a lot of really good panels. But there were a number of times I heard people on a panel say, “I don’t know why I’m here.” Or they wondered why they were on a particular panel. Other times the panel was completely off topic when compared to the program.

When I asked about this during the feedback sessions, it became clear that most con programming is created from the top down. The program director decides what panels would be interesting, then looks at the list of people available for panels and does a mash up. I know this is oversimplification, they do take suggestions for ideas, and may create panels based on who’s there.

This struck me as strange. Especially considering science fiction conventions like WorldCon are run by fans for fans. There are cons, particularly comic book and media cons, run by companies for profit and their motivations may be different from a fan convention.

So if a con is created for fans, why have a top down approach to panel creation?

Why not have a bottom up method?

I was immediately reminded of how the South by Southwest (SXSW) creates its panels. SXSW started out as a music festival in Austin, expanded to include film and interactive festivals. According to their website, around 34,000 attendees come every year.

To create their panel programming, they use an online application call the Panel Picker. It is a bottom up approach to panel creation. People suggest panels they’d like to see and then potential attendees vote on the panels. 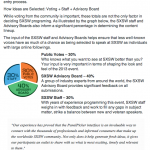 The Application Process
for SXSW panels

When suggesting/creating a panel, you submit a description, including what would be used in the program, and who would be on the panel. The whole panel comes as a package to the programming people and the suggester is responsible for making sure everyone on the panel knows what they are doing ahead of time.

I wasn’t able to see exactly how panel picker works because suggestions are currently closed from 2013 and not up for 2014. But there is information in their FAQ.

One thing to note. The votes aren’t the deciding factor in what gets in the convention. There is an advisory board, and the program directors who make decisions.

This approach would work great for a big con like WorldCon. But there is one really big piece of the pie that is currently missing to make this happen – the software.

I looked to see if the SXSW panel picker was open source, but it doesn’t seem to be. There are a couple of open source con related projects going on right now, this could be a third.

I’m going to start thinking more about this concept and blogging about it. Tomorrow, a post about the advantages of doing it this way and some nuances that need to be thought about.

Then I’ll start a design plan for this piece of software. List out what it must do, how it would work/flow and what would be needed to make it happen.