Dr Piazza has an interesting and disturbing gunfight video posted on his blog today.

A few points I’d like to make after watching it. 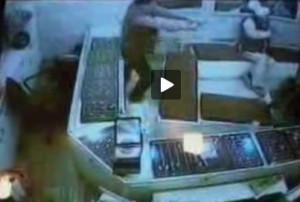 First a break down of the armed citizens actions.

:07 – He gets shot. It appears he was hit as soon as the bad guys came in.
:08 – He moves, and gets a hand on the gun in under a second.
:10 – Gun is out and moving toward assailants. Then he’s hit again.
:11 – He’s got two hands on the gun and it up where he could see to fire. But he can’t because now he has to rack the slide to get a round in the chamber.
:12 – He’s racked twice and the slide locks back. And he’s shot again.
:16 – Its obvious his gun isn’t doing anything to the assailants, and they are just unloading into him. Then they walk up to him, kick him in the head and take it away.

Really. There is no reason, in this day and age, not to carry a weapon that is perfectly safe to carry ready to fire. And as we see here, it is the difference between life and death.

#2 The Fight Isn’t Over Till It is Over

This guy started out by getting shot and got shot multiple times. At least 3, more likely half a dozen. He was still pointing the gun at the bad guys. If it had been functioning he would have been inflicting damage.

On the flip side, just because you shoot someone doesn’t mean they aren’t going to shoot back. Keep the fight going till you are sure they can’t shoot anymore.

#3 This Guy Was Really Pretty Good

Ultimately he probably died. But the fact is it was a poor choice of firearm and carrying that killed him.

He drew from concealment in under a second after being shot once. I think most CHL holders grossly underestimate how hard it is to just get their gun out from where they are hiding it and on target.

He got it up and both hands on it. If it had been functioning, he had a good platform to shoot from. He didn’t close his eyes, hold it with one hand and punch as he fired in the general direction of the assailants. At least not until the end.

There Was No Blood

This is more an EMS thing. We are taught to cut someone’s clothes of and look for the bullet holes, both entrance and exit. This guy got shot many times and in the movies there would have been blood everywhere. A big pool under him. But there was nothing. He was bleeding enough to lose consciousness in about 5 seconds, which is a lot of bleeding, but you couldn’t see any of it.

Cut the clothes off medics.