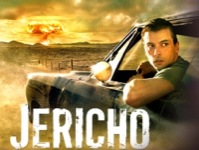 I started watching Jericho after it had been going for awhile. I watched because it was a show about survival, specifically about surviving after a nuclear attack. The thing I thought interesting was seeing what things the inhabitants of Jericho had to overcome in order to stay alive. The subplot about the bomb wasn’t really that important to me.

I defended Jericho to the hardcore survivalist crowd both because they were overly picky and because people do do stupid soap opera like things even in the worst of times. I also like the show because this was small town America and we are still comfortable with nobility in the small town. Nobility of character is in short supply these days on TV. All characters have to be tragically flawed.

Jericho got canceled, but CBS brought it back because of a fan campaign. Alas, it wasn’t enough in the long run. TV doesn’t work on quality of fans – or the work – only quantity. Jericho ended up with too few viewers by a long shot. Now it is gone.

The final episode was very good. Taking the story big with fighter planes and nuclear bombs, and keeping it small with ordinary people burying their dead, getting married and decided it was better to do the right thing than win.

Jericho I’ll miss you as will all of your die hard fans.