This morning I was doing some stuff in my home workshop/office and saw the box for my River Song Sonic Screwdriver and it got me to thinking, which lead to a really cool epiphany. Rather than jump to the cool part straight away I’ll give you some of my internal dialog.

Wow, River Song got her own toy when she was in only one episode, that’s cool.

Dr David said, “Why would I give her a sonic?”

When did he give it to her? Did she have a sonic during her Matt Smith years?

CUT TO: MONTAGE OF RIVER SONG SCENES with fuzzy edge dream/memory effect as RON thinks about it.

He remembers her wizbang future tricorder/ipad all the time, but not her Sonic.

(Shot with her holding her red shoes in one hand and device in other.) 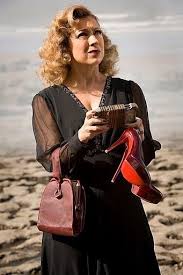 (Shot her showing device to someone) 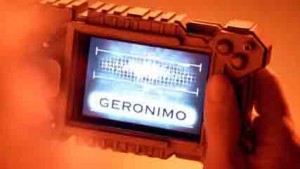 Mmmmm…Of course there was obviously a lot of time he spent with her off screen.

MONTAGE CHANGES TO SCENE OF RIVER MENTIONING THINGS SHE DID WITH THE DR.

(River Tells Rory about Stevie Wonder on the Thames.) 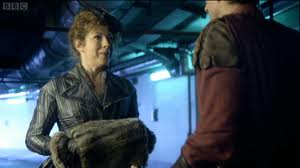 CUT TO: RON in the Closet

Hey wouldn’t it be cool if they did a parallel Dr Who with Matt Smith and River Song? It could all take place in those off screen times.

You know one of the first things River said to Dr David was….

CUT TO: Scene from The Library where RIVER is looking closely at the Doctor’s face and says:

“You look so young.”

SCENE ENDS WITH EXPLOSION OF ENLIGHTENMENT AND GEEKY JOY.

She got her Sonic from a Doctor that looked older than David Tennant.

Smith never gave her her sonic.

This would prove Moffat was a genius if he does it. That first River Song episode wasn’t even one of his. He didn’t write the line “You look so young.” Matter of fact he screwed it up by making the next Doctor, the one River spends so much time with, the youngest Doctor ever.

Maybe he decided on an older Doctor just so he could make this line make sense.

Dang, now why didn’t I think of this before I was in a Q&A with Stephen Moffet at the Dr Who Premiere in Cardiff.