The other day I received the latest issue of the Cheaper Than Dirt catalog. Gracing the cover was this firearm. 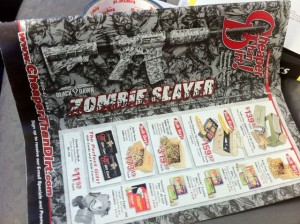 I was a little surprised. This isn’t an airsoft gun, this is a really AR-15. Someone thought there was a market for a lethal firearm pimped out a a zombie killing gun.

This could be for a number of reasons.

It could mean people think zombies are real and they need to prepare. I don’t think that’s true.

It could be because firearms are just fashion accessories. To some extent that is true as evidenced by everything being “tactical black” when few buyers have any tactical need at all, much less a tactical need for black.

I think the zombie AR shows a fundamental shift in American cultural attitudes toward firearms. We are at the point now where firearms are normal things. Like our power tools, or our cars, they are just part of life. We have such an abundance of choices so all that differentiates one from another comes down to cosmetic design. In that case a zombie motif makes as much sense as a pink AR for the ladies.