For years I’ve heard really good things about Fenix Flashlights. People told me they were as bright and good as a Streamlight but for less money. For some reason I’ve been reluctant to take the step of spending over $50 for a flashlight. Instead I’ve opted for ubercheap lights instead. 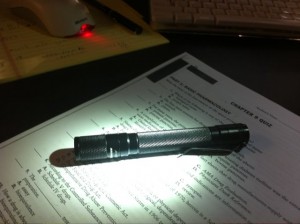 I was at a gun show recently and walked by a booth and the guy had these 4Sevens flashlights setting out, so I asked him about them. Well it turns out they are the people who designed and made Fenix’s lights. Now they are doing their own line of lights. He showed me the Malstorm, saying it was the most powerful tactical light available today at 300 lumins. That’s a statement we could argue with. But he took the light and aimed it at the far wall of the George R Brown convention center near the ceiling. In day light with windows and lights you could see a distinct pattern of light from the flashlight. I was hooked. But he was sold out.

I turned to the web. And found the 4Seven’s website, which presented me with a plethora of lights and many decisions. I did end up buying the Maelstrom G5 and I like it and may review it in the near future. But I also bought the Quark MiNi AAÂ². I wanted an everyday carry light and the MiNi is pretty small and uses standard AA batteries. I’m not hung up on having AA over C123 but the AA helps with size.

I’m in a love hate relationship with the AA, so I’m writing a review.

The little light is bright. Put on its highest setting you can light up a car 20-30 yards away at night. The specs say it is 180 lumens, but what does that really mean? I found that my cheap lights compare to it when shining inside my car for example, but they don’t have as much “throw” meaning they can’t light things up far away as well.

The form factor is good. The light is the size of a big pen. Smaller than my Livescribe Wonder Pen, or some of the promotional pens I’ve gotten. It is about as big around as those huge pencils we had in the first grade. Its made of metal and feels solid, I have no worries if I drop it or if I needed to hit someone with it. It fits cleanly into the side pocket of my EMT pants and is only a little bigger than my pen light. It also fits comfortably in my hand.

It has useful modes. There are a number of modes and all of them are useful. Low, medium, and high are the main continuous modes. There is strobe, SOS, and 2 beacon modes which flash at different rhythms. At first I was kind of like, “Why do I want a low beam?” But when you are in the dark, you generally don’t need a huge amount of light. Drop something in the backseat? Low is more than enough. I’ve ended up using it most of the time.

Strobe is also very cool. Supposedly – and I’ve tried it before and it seems to work – if you have your light on strobe and walk toward someone with it on, they won’t be able to tell how far away from them you are. It is also going to put an epileptic in grand mal. 🙂

No crenelations. Many tactical flashlights have these little up and down protrusions around the glass of the light called crenelations after the jagged top of castle walls. The reason for these is that if you hit someone with the light they provide a more jagged edge. Hitting someone overhand with your light is a very real options and I’d like to have the edge. Not a show stopper but a nice feature.

User Interface Sucks. This is the show stopper and why I will probably get a different light for carry. Remember the light has 6 modes? Well to switch between them you have to turn the head of the light off and on. You turn the light on by screwing the head counterclockwise till it stops and comes on, by default into low light. Then you need to quickly turn it off and back on to go to the next mode, again for the brightest setting. Do it 4 times in a row and it switches to the next mode set, so when you turn it on it starts in strobe.

The biggest problem with this is you need two hands on the light to change modes. You can pretty much turn it on with on hand, though you have to hold it overhand to get your thumb near the front of the light. But I find it awkward to switch modes in this position. Plus no matter what mode you leave it in, if you turn it off for very long, you back to low when you turn it on.

It is just clumsy to use the light, which in the end will make me replace it.

I think a lot of what I don’t like about the UI would be fixed by getting the tactical model. It has an tail switch to turn it on. You only use the front to “program” the modes and its position is what the turn on level is. The Maelstrom works this way. Only negative is you only have 2 modes on the tactical mode, 3 would be nice.